Construction work started on a new club house in Bad Ragaz in September. On 29 April 2017, the Grand Resort Bad Ragaz opened the new home of the Golf Club Bad Ragaz precisely on schedule. The modern building will house the new golf restaurant gladys, the Golf Shop, the Golf Office, changing rooms, and caddy and equipment rooms. It can also accommodate non-golf-related events.

On 20 September 2016, after a great deal of planning, the old club house was demolished to make way for a new, modern home for the Golf Club Bad Ragaz. Exactly 222 days after the start of construction, the building was ready for use on 29 April 2017.

The new golf club house at the Grand Resort Bad Ragaz features an impressive clarity of form. Mounted on an imposing foundation, the “bel étage” appears dignified and spacious, and features a combination of dark wood and large windows, along with a beautiful sun terrace on which to relax.

A sleek interplay of wood and stone

Interior designer Claudio Carbone has been able to translate the simplicity and style of the external architecture to the interior of the building and create an extraordinary and harmonious ambience with the natural materials of wood and stone. For Carbone, wood is the most striking element: the bright, natural oak which was used in the ceiling and wall panels exudes calm and comfort. It is simply yet elegantly combined with the grey stone floor, which is also used on the terrace and which harmonizes with the concrete foundation and parapets.

So as not to disturb this interplay between the colours and the materials of oak and stone, Claudio Carbone chose to have the free-standing furniture clad in simple black leather. The new club house and Robert Hubmann’s kitchen feature state-of-the-art lighting for the optimal staging of wide-ranging events, including an intimate dinner for two. The restaurant, whose chef has been awarded 14 GaultMillau points, has been renamed gladys. 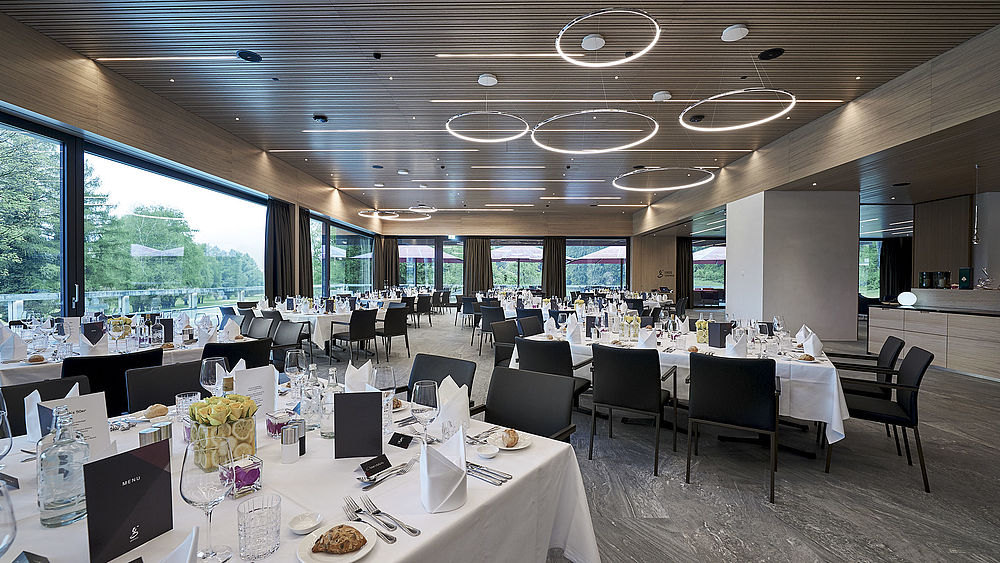 New possibilities for use

In addition to its conventional use from spring to autumn, the club house, thanks to its enhanced versatility, will now be open in winter for banquets, presentations, conferences, seminars, readings and musical performances. Regular resort guests and golf club members will nevertheless continue to enjoy the usual peace, space and time to pursue their passion for golf or indulge in fine dining.